Surviving Road Hazards While On Your Bike 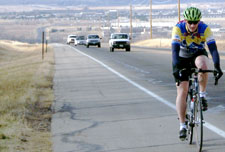 Cycling is a unique sport because its arena is the open road. That’s the same place frequented by traffic, potholes, snarling dogs and absentminded pedestrians.

But sometimes we’re our own worst enemy. Inattention and poor technique can put us on the pavement as fast as any hazard. Use these tips and you’ll be less likely to take a tumble.

Some Safety Rules To Live By:

Always ride with your head up. While cruising along, it’s tempting to stare at the whirling pattern of the front spokes or fixate on your cyclo-computer’s numbers. A momentary downward glance that lasts just a second too long can mean riding into a problem that could easily have been avoided.

Focus. The smooth and rhythmic motion of pedaling can become hypnotic. Daydreaming cyclists have crashed into the back of parked cars, wandered far into the traffic lane or blithely ridden off the road. Don’t let yourself be separated from the outside world by the vivid canvases created by your imagination. Keep your head in the game.

Keep your bike in top mechanical condition. Repair or replace faulty parts sooner rather than later. It’s a loser’s game to milk “just one more ride” out of worn brake pads, a frayed cable, or tires with a threadbare tread or bulging sidewall. Your first line of defense against the challenges of the real world is a bike with all parts in good working order. Bring you bike into our shop for a free estimate and expert repair.

Punctures
It’s every rider’s fate to flat. But it’s relatively easy to limit the frequency. Learn how to change a flat if you get one.

Choose your line with care. The best way to avoid punctures is also the easiest: Steer around broken glass, road rubble and potholes.

Use tires with a Kevlar belt under the tread. Kevlar does a good job of stopping nasty things from penetrating. Inspect the tread after every ride for embedded debris. Remember, most punctures are caused by something sticking to the tread and working through during numerous wheel revolutions. Replace tires before they become so thin that they’re virtually defenseless against pointy things.

Check inflation pressure every couple of days. Tubes are slightly porous and may lose several pounds of pressure each day. Soft tires slow you down, corner poorly, wear fast, and don’t protect your rims against metal-bending impacts. Pump up those tires!

Potholes
Hitting potholes can bend your rims beyond repair. If the chasm is deep enough, it will send you hurtling over the handlebar when you bury the front wheel and the bike suddenly stops. Here’s a primer on pothole evasion.

Note where potholes lurk on your normal training routes. Plan your line well in advance to avoid them. Don’t expect the road to be in the same condition every day. Potholes have a habit of sprouting up out of nowhere, especially in the winter and early spring due to the daily freeze/thaw cycle.

Treat potholes like glass.  Ride around them, first checking behind for traffic. Be mindful of riding partners when you change your line. Newly minted pot­holes present a double hazard — the chasm itself, and the chunks of shattered pavement around it. If the pothole doesn’t bend your wheel, the sharp bits of rubble might puncture your tire. Give these highway craters a wide berth.

Jump your bike over a pothole, if you have the skill and are unable to ride around it because of traffic or adjacent riders. Learn this move on a grassy field. Level your pedals, crouch off the saddle, then spring up and lift with your feet and hands. Start by jumping over a line on the ground, then graduate to higher but forgiving objects such as a rolled-up towel or a shoebox.

Railroad Tracks
Unlike most dangers, tracks can’t be ridden around. You can suffer an instant crash if your tires slip on the shiny steel rails. Ride with extreme caution and follow these safety tips.

Slow down! Tracks are rough, and even if you don’t crash you could get a pinch flat. This happens when you ride into something abrupt, like a rail, and it pinches the tube between the tire and rim, slicing two little holes in the tube.

Rise slightly off the saddle. Have equal weight on your hands and feet. Let the bike chatter beneath you. Use your flexed arms and legs as shock absorbers.

Cross tracks at a right angle. If the rails are diagonal to the road and you cross them at an angle, your front wheel can be twisted out from under you. A perpendicular passage is essential in the rain. Wet metal tracks are incredibly slippery. The slightest imbalance or abrupt move can send you sprawling.

Jump if you’re real good. Racers who need to cross tracks at maximum speed will jump them. They use the same technique that works for potholes, but with more speed and lift because they must clear two rails. Coming down too early means the rear wheel will hit the second rail, guaranteeing a ruined rim or a pinch flat. In most cases, jumping isn’t worth the danger. It’s better to slow down, square up, and creep across.

Additional Slick Spots
Painted lines. These can be slippery, especially the wide markings for pedestrian crossings at intersections. The paint fills in the asphalt’s texture, producing a surface that’s uncertain when dry and deadly when wet. The danger is worse when the paint is new.

Dry oil slicks. These may be nearly invisible, but you can spot them as darker streaks on a gray pavement. Be real careful in corners. You aren’t safe if you ride through oil on the straights. The greased tread might slip in a corner just ahead.

Wet oil slicks. If it rains, a small oily patch can grow until it covers the whole lane. Be on the lookout for the telltale multi-colored water. There’s no pot of gold at the end of this rainbow, only a black-and-blue meeting with the pavement.

Wet metal. If it’s been raining and you come upon anything metal in the road (manhole cover, steel-deck bridge, road-repair plate), it’s as treacherous as riding on ice. Cross it with the bike absolutely upright. Even a slight lean can cause the wheels to slip. Smart riders walk their bikes across wet steel bridges.

Wet leaves. Be very careful in the fall, or you will. Even if the road is dry, there can be moisture trapped between leaves littering the pavement. When you see leaves in a corner, slow down and round the bend with your bike upright, not angled.

Sewer grates. Some old ones have bars that run parallel to the street and are wide enough to let a bike wheel fall through. If this happens, you can look forward to plastic surgery and possibly a lifetime of lawsuit riches. Many municipalities have replaced such grates with bicycle-friendly versions, but be careful in case a town hasn’t gotten the message yet.